My four-year-old son is suddenly very interested in writing.  Until recently, I don’t think he saw a need for writing on his own.  He strings letters together, mostly chosen only because they are letters he knows how to form, and then “reads” his scrawls back to me with lots of feeling and emotion as amazingly embellished stories.  The three or four words that he can spell conventionally appear often in his writing as well.  I am thrilled to see him making attempts at writing and to see him make connections between the written word and the stories he creates and enjoys.

His most exciting venture into the world of writing, however, was his recent creation of a special book in the art center at school.  For awhile, he watched some of the older children making books by folding paper and carefully stapling the edges to form pages.  They drew pictures and wrote words or sentences to match their illustrations.  Sometimes they dictated stories to a teacher, who wrote their words on the pages as instructed by the authors.  Then he decided it was his turn.  His finished product is called Beach, Beach, Beach.  He dictated his story to his teacher and she wrote his words exactly as he spoke them.  The words reflect his excitement and anticipation of a beach trip that was approaching over Labor Day weekend.  He came back the next day, book in hand, to add more pages.  He will tell you with great pride that it is now EIGHT pages.  It is written just like he talks…very dramatic and wordy…and it is his prized possession.  This past weekend was the beach trip that served as the inspiration for Beach, Beach, Beach.  We read the book over and over again throughout the weekend.  He fell asleep clutching it in his hand and was distraught when he discovered that the cover was slightly bent afterwards.  It is the last book we read before bed at night.  As he gathers the bedtime stories, Beach, Beach, Beach appears at the top of the stack, in a position of honor.  This is why we write…because of the satisfaction and pride it brings…because of the sense of accomplishment and confidence we feel when looking at a completed work.  My son is learning that he can use words to share his thoughts and feelings and that they are valued.  He is learning to communicate through “book language”.  He tries out new vocabulary in different ways to see if it works.  He is not an independent reader or writer yet, but he is well on his way to discovering a whole new realm of literacy development. 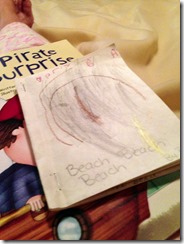 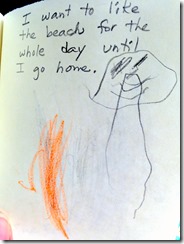